Craft a plan, set your boundaries

A classic, but even though I had this in the back of my mind from the start, I still think I didn’t set my boundaries realistic enough and didn’t craft my plan thoroughly enough. I managed to change the scope of the game somewhat, even though it’s still a monstrous undertaking for a single developer, but it definitely took time to recognise when something just isn’t worth the time and scale back the game to something that might actually be finished one day.

For example, I spent countless hours trying to implement a system where the player can configure the gamepad buttons to their own liking without success, until someone on the Discord mentioned how even many AAA-games don’t even have this function. Just set up a good default configuration and move on!

Working hard on a project that has no clear boundaries or plan makes it very hard to complete it. Write your plan beforehand and then write down what you will try to complete each week until the day you finish development.

Start building a community as soon as possible

If you’re new to making games and are serious about wanting to release a commercial(-worthy) game, marketing should pretty much be on the agenda from literal day one. Too often I see promising games tossed into the bin after they fail to gather any attention. Simply because the developer simply built the game and then threw it on the internet without the any marketing effort.

I can dig very deep into digital marketing, I’ll do that in a devlog later on, but the first thing you should is just start with marketing on a very small scale, very early on. Create an Instagram account and Twitter. Build an Itch.io page and post some screenshots and stuff as you develop your game. Learn how to use some tools like Hootsuite. Start a small Discord-server and invite some people you know online for example so they can give you feedback on ideas and early builds.

Look into some bigger Discord groups too. post about your game, reach out, look for help. Along the way you will gather a small group of interested players and helping hands. You’ll have a base camp ready to build your epic marketing campaign on in later stages of development.

Make the player act, not read

When i started replaying the earliest builds of Eniko: Ghosts of Grace myself, I felt like I was trying to explain too many things too fast. Conveying dense info through long paragraphs of text simply does not work. Instead, I started blending the tutorials with gameplay and I try to allow the player to learn by doing. I also made changes to the pacing of presenting information about characters and lore.

Keep a journal and/or inspiration spreadsheet

You never know when inspiration strikes! After countless times of getting a great idea while falling asleep and forgetting about it the next day, i used the good old trick of placing a notepad on my nightstand.

What helped me even more, was building what I call an “Inspiration spreadsheet”. I often get great ideas while, reading, watching tv shows or playing other games. For example, the design of the Crypts in Eniko: Ghosts of Grace was inspired by a scene from Dark Souls 3. I simply took a picture, added it to the spreadsheet file and used it as a reference. 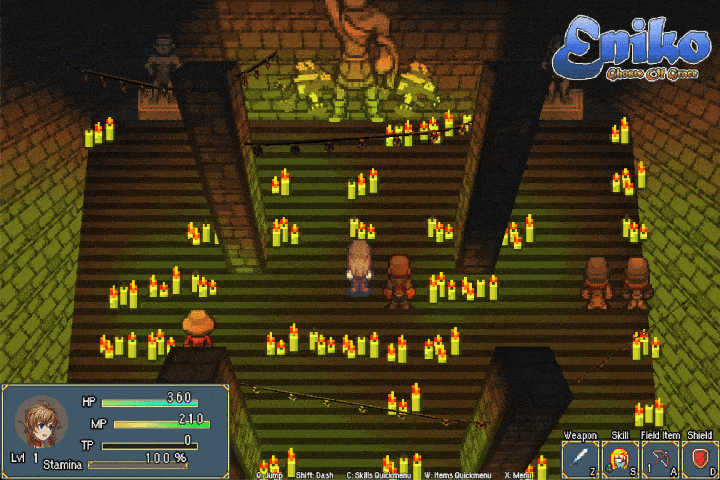 An older version of the Crypt of Doirosz, influenced by Dark Souls 3

I also have tabs containing contact info of developers, let’s players, journalists and more. When I find a well made game trailer, inspirational Instagram post or well thought-out Kickstart page: in goes in a list. A handy tool for character names or towns? On the list! Just as with marketing, start doing this from day one and let it grow organically. The spreadsheet has now grown in and almost endless source of inspiration and information.

Digital or paper based,just choose the type that you feel suits you best, and use it. Write down all your game design ideas. And keep it with you for when you’re suddenly inspired. For paper-based journals, I recommend using memo or pocket-sized notebook to jot everything down. It’s much easier to carry. Plus, you never know when inspiration will strike. Having an idea journal with you when you’re out whether it’s via your phone or notepad can come in handy.